About Us: Bob Martinez, Moderator

My Asturian grandparents, Victor Martínez Artíme (born in Salinas in 1894) and Josefa Fernández Inclán (born in San Martín de Laspra in 1895) immigrated to the United States in 1913, accompanied by their first child, José, then six weeks old. They traveled from Castrillón to La Coruña, then to Liverpool, and finally to Ellis Island on the ship Adriatic. The Ellis Island records show that they had $40 with them when they arrived. They lived for a while in St. Louis and Cherryvale, Kansas, before settling in Spelter (Ziesing), West Virginia, where my grandfather was employed in the zinc industry. The rest of their children, Michael, Isaac, Victor Angel, Gabriel, Manuel, Luis and Gloria were born in Spelter before the family moved to Niagara Falls, New York. Luis and Gloria died in childhood. 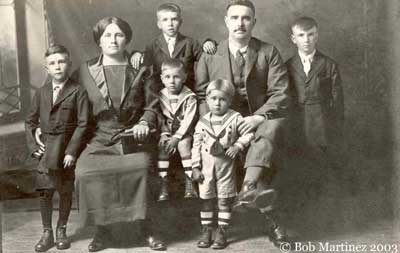 The above photo dates from the early 1920's. From left to right are Michael, Josefa (called Sena, my grandmother), Isaac (called Jack, my father, with his hands on his parents' shoulders), Victor Angel (below Isaac), Gabriel, Victor (my grandfather), and Joseph.

My father, Isaac, married Cecelia Bunzer in 1943. They moved to California, where I was born, but soon returned to Niagara Falls, where my brothers Richard and James were born.

For 31 years, I have been a biology professor at Quinnipiac University in Connecticut and teach General Biology (for science majors), Genetics, and Evolution. I also teach Bioethics and a course called Evolution in Biology and Literature, which deals not only with literature and evolution, but also with linguistics, pattern recognition, history, the Ancient Near East, myths of origin, philosophy, and religion. Obviously, I am very interested in interdisciplinary pursuits. I also enjoy learning about languages and their history. As a result, I can read quite a few with varying degrees of fluency. Most recently, I have been learning asturianu and find myself fascinated by its similarities to and differences from castellano and other languages derived from vulgar Latin. It's fun to speculate about evolution, both biological and linguistic. I will be posting a series of short articles about asturianu in the forum section. The photo above is of me at the "Roman" bridge at Cangas de Onís, October 1999. The bridge was actually constructed during the medieval period.

I recently married Meredythe Martinez, following the death of my late beloved wife, Evelyn. I have three kids: Kathryn, Susan and Michael, and four grandchildren: Lily and Zoe, and Jaden Moran and Ryan Robert, with whom we spend as much time as we can. The mother of Jaden Moran and Ryan Robert is Mexican and I'm proud to say that their household is completely bilingual. In the photo below, taken in September of 2002, Lily is on the left and Zoe on the right. 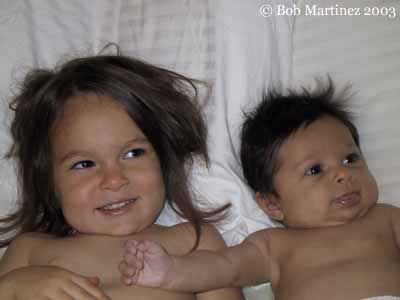 We also have an inordinate fondness for cats and currently have five of them, all of whom travel with us between our home in Connecticut and our summer, vacation period and weekend home on Cape Ann, Massachusetts. Despite my efforts to serve as a good role model (B.S. in Biology and Ph.D. in Genetics, as well as 32 years of teaching in higher education), none of the cats has thus far demonstrated any interest whatsoever in formal education.

In addition to the grandkids and cats, I very much enjoy cooking. My wife and I make and smoke our own chorizos, and I am regarded as a reasonably good pastry chef. Some of my Asturian recipes are available in the forum section of this website. My other interests include good food and wine, literature, music, computers, and conversation with friends.

In October of 1999, I traveled to Asturias with my brother Rick and my father. We spent three days in Gijón (Xixón in asturianu) and seven in Avilés, and explored Salinas, Piedras Blancas, San Martín de Laspra, Muros de Nalón, Gozón, Cangas de Onís, and Covadonga. I was astonished to see much more of a sense of regional identity than we usually see in the United Sates. In Gijón, for example, the castellano word "calle" on many street signs had been modified to the asturianu word "cai". We managed to sample Asturian cuisine almost continuously, especially seafood and cured pork products. My one culinary regret is that I was unable to find percebes on a restaurant menu.