About Us: Suronda González, Moderator

My paternal grandparents were Asturianos who immigrated to Clarksburg, West Virginia during the first part of the 20th century. My grandmother's father, Diego Vasquez and my grandfather's father, Nicanor González, started out in West Virginia working for the Grasselli Chemical Company's zinc processing plant in Anmoore, (also called Grasselli).

Later, their wives and children also emigrated. In 1908 Aurora Vasquez-Garcia, my great-grandmother, arrived with her four small children from Naveces, the town where both she and her husband, Diego, grew up. Similarly, Nicanor González returned to his hometown of Miranda, Spain to gather his family and in 1914 he again sailed for West Virginia with his wife Maria Fernandez González and their four children, including my grandfather Bernadino (Edward) González. Both Miranda and Naveces are small central Asturian towns a few miles west of Avilés.

Aurora Vasquez is the older woman at the far left of the image above. She is with her granddaughter Mary Jean González. Her daughters Mary (Mary Jean's mother) and Ida (my grandmother) are pictured at the far right of the image. For nearly a hundred years, three generations of my family worked in the zinc factories in Harrison County, West Virginia. My great-grandfathers worked in Grasselli as well at the factory in Spelter (or Zeising), West Virginia (pictured above). My grandfather Edward "Lalo" González also worked at the Spelter site, and my father Ronald González worked there until the factory closed its doors in 2002. 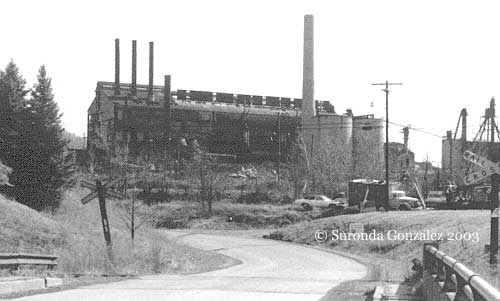 As a child, I spent a great deal of time in Spelter (pictured below) with my grandparents and their Asturianu neighbors. I've always been interested in our family's immigration story and began to study it formally as part of my master's program in the late 1980s. In 1991 I completed a Master's thesis ("Talking Like My Grandmothers: Spanish Immigrant Women in Spelter, W.Va.") based on oral histories I conducted with several of the women in the community. I'm quite interested in investigating constructions of Appalachia, and the multi-ethnic character of the region that has long been ignored.

During my research on Spanish immigrant women, I sought out contemporary voices that situated the experiences of immigrant women in a broader, national context. I became quite interested in the work of Grace Abbott, a social reformer working as director of the Immigrants' Protective League of Chicago from 1908-1921. I'm recently completed my dissertation, which explores Abbott's attempts to shape immigrants' experiences through reforming American institutions and laws. While my research has taken me far from West Virginia, my own family stories inspire my continued interest in past, as well as current, immigration issues.

In addition to doing research, I work full time with an innovative language program which helps students apply their language skills to content specific areas. In short, Languages Across the Curriculum bridges the all-too-common divide between language classes and the rest of the curriculum.

When I'm not working, I love traveling and hanging out with friends. Most recently, I've taken to exploring Massachusetts. This picture was taken in Sandwich, MA, the oldest town on Cape Cod, on a very cold afternoon.

Although I haven't been to Spain in a number of years, I'm anxious to return soon. I'm quite intrigued about the possibility of locating the family members of those who emigrated to West Virginia during the early 1900s. I'd like to learn more about the experiences of those who remained in Asturias, as well as those who returned to the "patria querida" or traveled to Cuba as some of my family did. I'm also very interested in regional music and culture of both WV and Asturias.

Although I live in upstate New York, I'll always be from West Virginia. During the summer of 1999 I worked with Art, the Asturian-American Migration Forum's site administrator, at CHISPA, a Spanish language summer camp for high school students from the state. I return "home" as often as I can to visit with my parents, Ron and Sandra, as well as the many friends that remain there.